There's a storm again in the Philippines and stargazers are stuck indoors once more.
Now, astronomers are not meteorologists, but it pays to know the weather conditions of your area. Determining the weather in your observing site can help you plan ahead on your stargazing activities so you won't end up aiming your scopes at clouds, or spending fuel on a trip to a dark site.

Here are some sites you can use to check the weather condition:
[Note: Weather forecasting cannot produce a weather prediction that is 100%, it isn't possible.]

WeatherSpark
WeatherSpark is a new type of weather website, with interactive weather graphs that allow you to pan and zoom through the entire history of any weather station on earth. You can get multiple forecasts for the current location, overlaid on records and averages to put it all in context. WeatherSpark is currently making use of 4,000 weather stations. 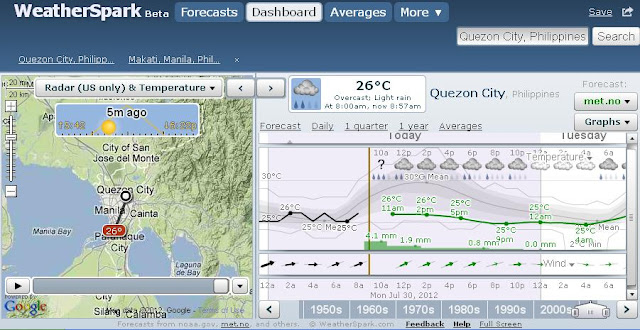 I personally prefer this site because it is updated and fairly accurate.

Typhoon2000
Typhoon2000 is a website that provides tropical cyclone information over the West Philippine Sea (South China Sea) and Northwest Pacific Basin. The website is updated every 6 hours during times of tropical cyclones. 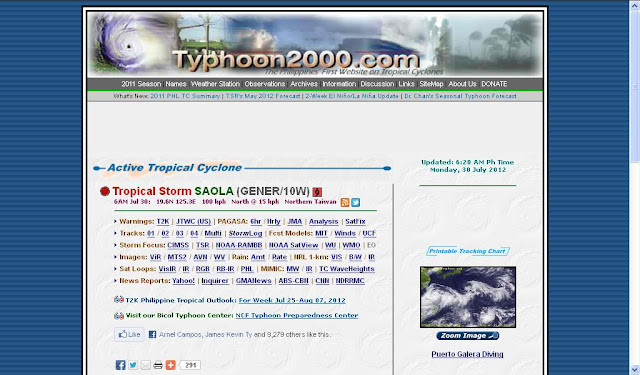 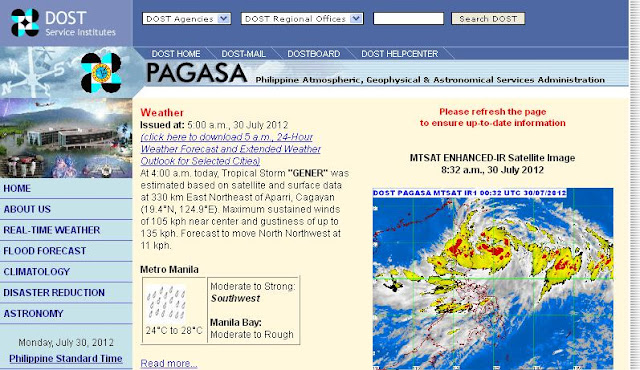 Posted by AstroNorm at 6:39 PM No comments:

The night sky continues to be cloudy this past few weeks. It seems the only visibility lately happens during daybreak, where bright targets such as the Moon, Venus, Jupiter, and the Sun can remain visible through the thin veil of clouds. I haven't been able to wake-up early to observe, however I did manage to wake up last Monday to see the conjunction of the waxing crescent moon, and the planets Venus and Jupiter, as well as the eye of the bull (Taurus) - Aldebaran. 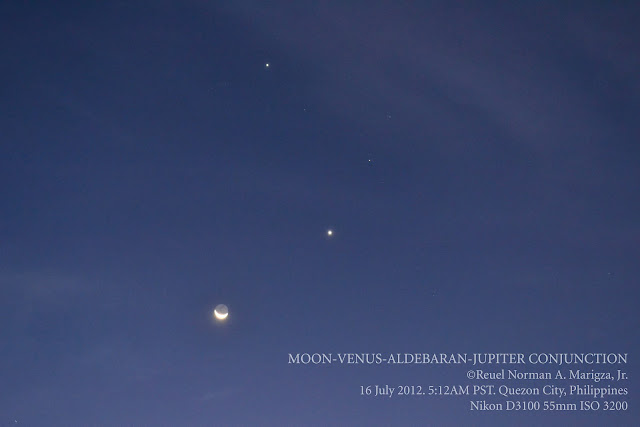 I rushed to setup Alpha, my 6-inch newtonian, and made use of a Meade T-Adapter which I borrowed from Ma'am Ruby Dela Cruz of RTU. The mount of Alpha had no locks so I had some difficulty at pointing the scope because of the added weight from the camera and adapter. 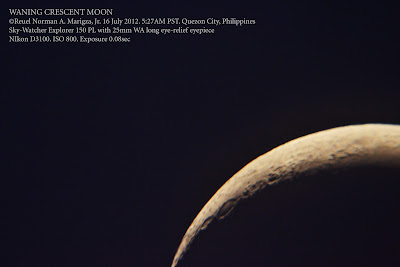 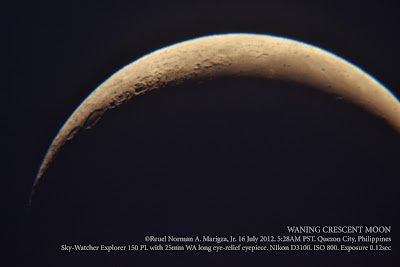 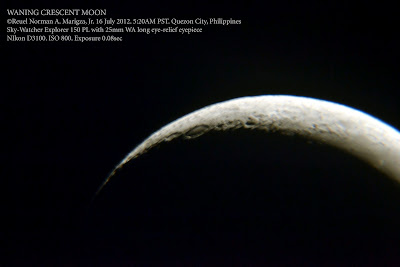 Posted by AstroNorm at 9:31 PM No comments:

Pluto, the former planet of our solar system, is now found to have 5 moons. This new moon just followed the recent discovery of its 4th moon, P4, last year. The Pluto-system now consists of the Pluto & Charon, Hydra and Nix, P4, and now P5 as of July 2012.

Astronomers using NASA's Hubble Space Telescope were able to observe the moon orbiting Pluto from images taken with Hubble's Wide Field Camera 3. P5 (not an official name yet, likewise with P4) is estimated to be irregular in shape ranging from 6-15 miles across. It's orbit around Pluto has a diameter of 58,000 miles.

Although it is now found to have more moons, Pluto cannot yet retain its planet classification. The number of small solar system bodies around Pluto's orbit (which may be the reason behind the growing number of moons) shows that it still violates the 3rd condition of a planet.

According to the IAU (International Astronomical Union) a planet is a body:
a) in orbit around the Sun,
b) has sufficient mass to achieve a hydrostatic equilibrium shape (spherical shape); and
c) has cleared it's neighborhood around its orbit.

The presence of the Kuiper belt objects removes Pluto from the planet category and down to the dwarf-planet category (defined by satisfying condition a and b) with it's partner Charon. All other bodies that only match condition a are classified further into SSSBs or Small Solar System Bodies (asteroids, meteoroids, etc.).

We will get to understand Pluto further when the New Horizon's spacecraft will do a flyby on 2015.
Posted by AstroNorm at 9:19 AM No comments:

Its been a while since I've written anything on this blog. The weather lately has been uncooperative, been quite busy reviewing lessons for my classes, and the net connection at home has been down, but still the art of science documentation must prevail! hehe..

This school year we began one of our classes by running around on a pile of sand, attempting to throw balls at a right angle projection, spun around in office chairs, all in an attempt to create simplified means of teaching astronomy concepts to students. This is the field of astronomy education.

A lot of students are interested to learn about astronomy, yet not all teachers know how to teach it. Our class attempts to create simplified experiments on how to show various concepts in astronomy in a means where the students can be taught the basics without having to rely on technical equipment or settling for textbook style lectures. The experiments are creative and can really challenge the learners to think for themselves.

I tried one of these experiments on disproving horoscopes on my Introduction to Astronomy class. We shuffled the previous day's horoscope and let the students choose which matches their experience for that day. A very small percentage of the class were able to match their horoscope which goes to show how unreliable and inaccurate the prediction of horoscopes are.

Also, I showed them the site where I got it online (philstar.com; June 24 horoscope. Experiment conducted on June 25) and showed a particular line which said "the moon goes into hiding these week,disappearing a little more each night until the new moon in Cancer on Friday" which was very much incorrect since the moon was still in the waxing crescent phase and which means it has just came out of the new moon.

Simple as the experiment maybe, it well proves its point. The development of educational materials in astronomy can really help develop astronomy here in the Philippines, in terms of astronomy education. I'm looking forward to our outputs.

Posted by AstroNorm at 9:05 AM No comments: