How Did You Know?

The other night we had a stargazing session where the highlights of the night was the Moon, Jupiter and Mars. When pointing out the planets, a common question that arises from the students is "How did you know?"

Fair enough, there have been those who make wild guesses as to what planet they are actually looking at, so it is just right that a critical thinker might be skeptical.

So how do we KNOW?

It is part of the astronomer's (or amateur astronomer's) job to be familiar with the night sky. Knowing where the planets are during a night comes with the territory. While explaining to the Physics 25 students, I pointed out the line in which the Sun, the Moon and the planets pass. This line is the ecliptic. Along these line extends a band we commonly know as the zodiac.

Now, the stars and the constellations in the zodiac have already been identified, along with their magnitudes. Now if a star is found in this path that doesn't belong to the constellation - that is usually a planet. When the planets are closest to the Earth, they usually shine with bright magnitudes (such as Mars and Jupiter on that night). When this happens, they become easy to identify.

Now, a little something on the planets: You can never see Mercury and Venus during midnight. You usually see Mercury in transit with the Sun, and Venus usually appears as a morning or evening star (during sunrise or during sunset). Now, only three more planets are visible with the naked eye, those are: Mars, Jupiter, and Saturn. The unique red-orange glow of Mars can distinguish it from the other two. Saturn on the other hand, due to distance, does not shine as bright as Jupiter and Mars. The remaining planets, Uranus and Neptune, are telescope object. It means they can only be observed via telescopes.
Posted by AstroNorm at 3:36 PM No comments:

Last Thursday was the schedule for the regional eliminations of region 7 for the IYA 2009 Astronomy Olympiad. I was really excited to join, it was a test of my knowledge.
I left Dumaguete at 3:49 am and got the boaat in Sibulan. UP NISMED announced that I have to be there by 8 for the registration. It was 9 plus already and I'm still stuck in Cebu's traffic. I texted Ms. Jocelyn Canto, the DepEd rep, and she said it's ok, we will wait. I was worried since I didn't know where to find the venue. I arrived and lo and behold, only high-school contestants were there. I was the only college participant.

Anyways, we waited until 10:30 but still no college participants arrived, just the HS. I still took the written exam though.

The funny thing is, there was no categories given, so I ended up jumping from one astronomy textbook to another. I focused on things I didn't know much about, like eclipsing binaries, variable stars, theories of formation of the universe, gravitational micro-lensing an all that just to find out one thing - FOCUS ON THE BASICS.

It's funny because I'm supposed to know these things but because I was too focused on other astronomy topics, I failed to study them. Maybe I was too confident. Anyways, I didn't do too good, learned my lesson. I'm just lucky I'm blessed by God with an opportunity to do better. This time I'll do better!
Posted by AstroNorm at 12:03 AM No comments:

Two of my passions are Astronomy and Art. Here are some of my paintings where I merged both astronomy and art: 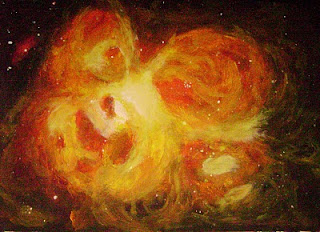 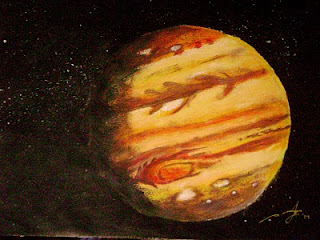 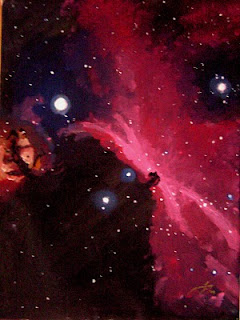 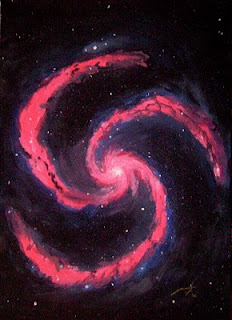 Posted by AstroNorm at 1:21 AM No comments: