Tonight will be the closest planetary pairing between Jupiter and Venus (0.3 degrees apart) after a very long period. This conjunction of the two planets is believed as one of the likeliest candidates for the 'Star of Bethlehem'.

A lot of amateur and professional astronomers throughout the world have been observing these two as they get closer and closer each night. I have planned to document their displacement in the night sky however cloudy skies have been dominant as of late.

Here are my images taken as of last night (June 30). 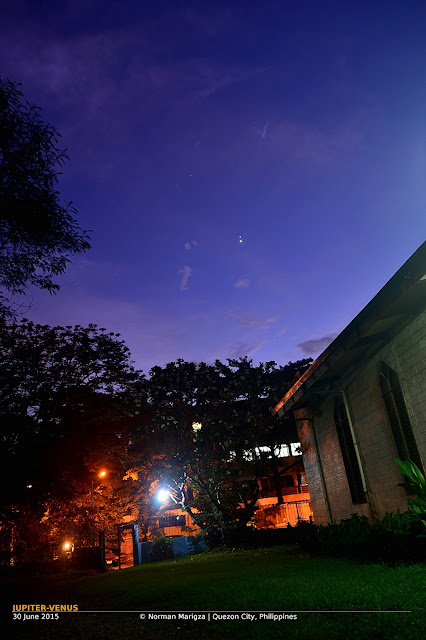 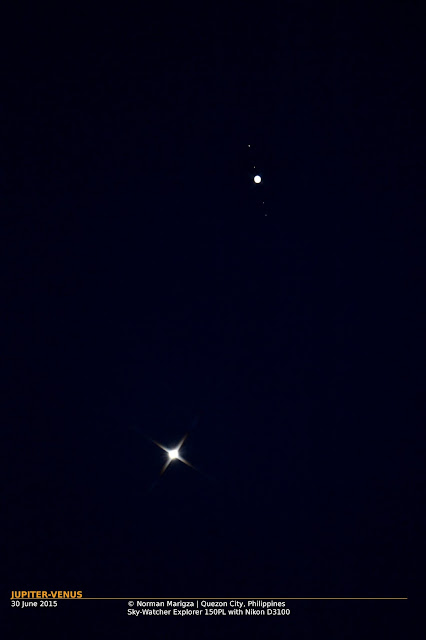 Unfortunately, my close-up image was plagiarized last night. The copyright was cropped out and the levels edited, but you could still tell it was my image from the distinct features (besides I have the RAW). You may share my images but please retain the image credits and do not claim it as your own.
Posted by AstroNorm at 6:35 PM No comments:

Save the Night for Sea Turtles

Today (June 16) is World Sea Turtle Day – a day used to honor and highlight the importance of sea turtles. These wonderful creatures are at risk due to various human activity, including the presence of artificial lights.

Now for those in the astronomy scene we value the dark night sky in order for us to appreciate the wonders of the universe. But known to little is the threat of light pollution on these endangered creatures. Female sea turtles look for dark coastal areas to nest their eggs and to keep them protected. The presence of coastal lights prevent them from finding suitable nests for their eggs. Sometimes coastal lighting casts shadows on some areas that to the turtles may seem dark and suitable, but is actually exposed come daylight.

Sea turtle hatchlings also have a natural programming that direct them towards the safety of the sea. For centuries the reflection of the moon and stars on the sea have guided them. With the presence of artificial coastal lighting today, they are disoriented and crawl away from the water and into roads or populated regions where they end up ran over or sold as pets (which is illegal for endangered species). Others who don't find their way become exhausted and dehydrated until they perish.
Among the critically endangered sea turtle species are the hawksbill sea turtle (Eretmochelys imbricat) who have been reported to lay eggs in the populated and highly commercialized island of Boracay. We have four other species of sea turtles inhabiting the Philippine waters - Loggerhead (Caretta caretta; endangered), green sea turtle (Chelonia mydas; endangered), leatherback sea turtle (Dermochelys coriacea; critically endangered), and the Olive ridley sea turtle (Lepidochelys olivacea; vulnerable).

Sea turtles are only part of a large number of species of animals affected by artificial light at night. So let's help protect these species by avoiding the use of excessive and unshielded lighting. In doing so, you also allow astronomers, stargazers, and astronomy enthusiasts a better view of the sky. All these animals are affected - and you and I are among them.

If you are interested to help monitor the levels of light pollution in the Philippines, you can join us at the Philippine Light Map project.
Posted by AstroNorm at 11:14 PM No comments: