Traveling on a Holiday – Astronomy Edition 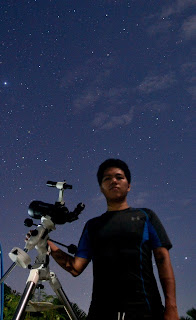 A typical Christmas holiday for my family involves a lot of traveling. Depending on our mode of transportation I would usually just take my camera along and take some unguided long exposures of the night sky whenever possible. However, since this holiday we had a large enough space for transportation I decided to take my EQ4 mount along with my Celestron C90 for a series of free telescope viewings (FTVs).

Our first destination was my hometown and summer capital of the Philippines – Baguio City. Manila had been cloudy due to the t
ropical storm passing through the Visayas, but clear skies dominated most of the nights here. The high altitude and good transparency of Baguio always made it a pleasure to observe during good weather. I setup my telescope in front of the Quezon Hill Community Church. Carollers and passersby got to view the Moon up-close as well as take photos through their phones. A group of kids stopped by after every round of carols they made. Initially I wanted to get in touch with UP Baguio Astronomical Society to join forces for an FTV here but time constraints and consideration for the students being with their families made me decide to setup on my own.

My next FTV destination was at Agoo, La Union. This is where my grandparents' house was located, and where my grandmother built a dedicated astrodeck for my use. From late in the afternoon until the evening I would take out my telescope to the basketball court of the local barangay (native Filipino term for a village; district or ward) to view the waxing gibbous Moon. The court was filled with people playing basketball and kids and adults watching. The kids were first to gather around the telescope, and little by little players would slip from their game to take a peek until eventually everyone came to see.

The following day we traveled to San Juan, La Union to stay overnight in a resort. Several resorts lined the beach as it was a frequented surfing spot. I took my telescope out on the beach for an FTV. Visitors of the resorts who saw the setup came to take a look and have discussions about astronomy. The resort owner, who happens to have an interest in astronomy and how the ancient Polynesians used the stars to navigate the sky also joined me and welcomed the idea of doing an Astronomy Night event for the resort.

When we headed back to Agoo, I was surprised to learn that the children waited for me in the past night to look through the telescope. I did a second setup in the basketball court where a larger group of people got the chance to see the Moon and stars.

For the remainder of my nights in Agoo I stayed in the astrodeck – yes, I pitched my tent there – observing throughout the night and taking short naps when some clouds start to roll in. 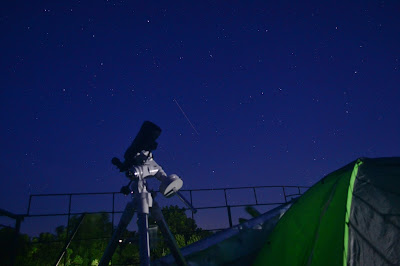 After New Year we headed back to Baguio. I didn't get to do anymore FTVs after catching a cold – probably from spending a number of chilly nights in the astrodeck, and hot weather during the day. Being from Baguio, we tried to visit spots that we haven't been to or are not crowded by tourists. One of the places we went to is the Maryknoll Ecological Sanctuary. Why am I adding this to this log? Because of the cosmology/history of Earth inspired nature walk. The hiking trail was entitled Cosmic Journey where they trace the formation of the Universe to the evolution of man.

After the long holiday break it's back to Manila where I return to my laptop and cram my astronomy talk.