Please vote for the Filipino entries to the International Observe the Moon Night Art Contest.

Voting can be done at  surveymonkey.

The contest goes with the theme "What Does the Moon Mean to You?" where Each submission should convey a personal connection to our nearest celestial neighbor, describe the significance of the Moon to your respective culture, or highlight one or more of the ways in which the Moon has inspired you.

Here are the Entries from the Philippines
Painting:
5 Day Old Moon. By (Me) Reuel Norman A. Marigza, Jr.

Poetry:
Orb of Light. By (Me) Reuel Norman A. Marigza, Jr.

Recent news about the approach of near Earth object (NEO) Asteroid 2005 YU55 this November 8-9 has brought around speculations of a doomsday scenario. People say it's going to impact Earth, and a lot of fuss is going about in the internet.
Asteroid 2005 YU55 WILL NOT IMPACT EARTH during its approach. The asteroid will miss us by a margin of 325,000 km (200,000 miles), which is 0.85 lunar distances from the Earth. The path of the asteroid doesn't bring it close enough to be pulled by Earth into a collision course.
The C-type asteroid is relatively large, nearly spherical, at 400 meters in diameter. It was discovered in 2005 by Robert McMillan of the Spacewatch program near Tucson, Arizona. This NEO will be the closest approach of an object this big.
However, the approach of 2005 YU55 isn't even gonna be much of a visual sight since it will just appear as 1/4th arcseconds across (moon is 1800 arcsecs, which means you need a telescope to see it) and only with a visual brightness of magnitude 11. Not to mention its closest approach will be during daylight. Only radio telescopes can get high resolution imagery of the asteroid.

So, again there is nothing to worry about. :)
Posted by AstroNorm at 12:52 AM No comments:

During the long weekend I went up to my home town - Baguio City. I checked the weather for Baguio City using weatherspark which was introduced by Dr. Lee in the October meeting of the ALP. The weather was good for that week and my classmate in astronomy, Vanessa, was able to do some observations when she was in Baguio before me. Also, John Nassr from Baguio had wonderful images recently posted to his website.
Since the weather seemed to participate, I brought along my Celestron Travel Scope 70. I seriously put the word "Travel" in the TS 70 to the test for a stargazing tour with my relatives. The telescope is really lightweight and is easy to travel with in its custom backpack.
My first stop was in Long-long, La Trinidad. It was a dark site with wonderful star studded skies (see previous post). At first we thought we weren't going to be able to see anything since it was cloudy, but knowing Baguio's skies we knew things change quickly (one minute it looks like it's gonna pour, the next it's crazy sunny). I was able to see the Milky Way after a long time and lots of faint stars that I have missed since moving to the highly urban Manila.
The following day, we went down to Aringay, La Union to visit our grandparents. My cousin knew a remote site by the sea where the skies were extremely dark. However, clouds began to gather as we set up the scope and camera to view Jupiter. I wanted to observe again the following night in the same site, but we had to wake up early to go to Clark. So I set up in the church however there were a lot of obstructions.


Unfortunately, after we came from Clark, the following nights have been cloudy and I wasn't able to do any more observations. I was able to get some images of the moon and the sunset though.
Searching for dark sky sites is a must if you really want to see more during your observations. The problem of urban sites is that light pollution washes out the fainter stars and other celestial objects making them virtually invisible. Having access to dark sky sites is a key tool in observational astronomy. Since these sites are usually in remote places it would also be effective to have a grab-&-go scope or a scope that you can easily set-up and take with you on the go. 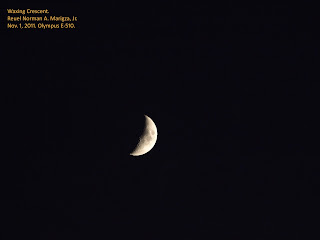 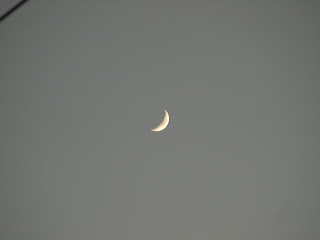 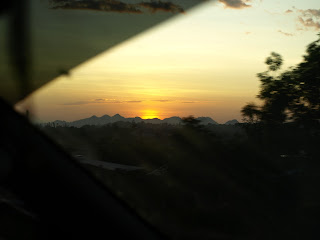 Posted by AstroNorm at 6:28 AM No comments: