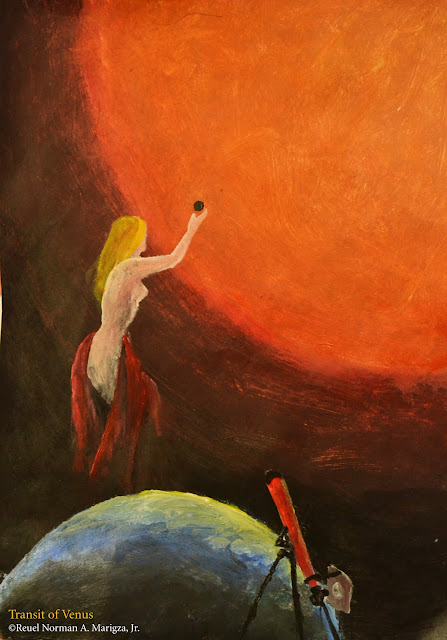 
A picture is said to paint a thousand words, so here is my astronomical artwork in promotion of the Venus Transit. Shown here is the passing/transit of Venus in between the Sun and Earth. Venus here is carried by the mythological figure Venus/Aphrodite - the Roman goddess of love, beauty and pleasure and procreation. On Earth is a refracting telescope representing observation which is done safely through projection method.
Posted by AstroNorm at 2:36 AM No comments:

This coming June 6 (Philippines; June 5 in other time zones) will be one rare astronomical event of a life time - the transit of Venus.

The Venus transit is an event wherein the planet Venus will pass directly in between the Sun and Earth, making it appear as a dot moving across the surface of the Sun. This does not happen often since the plane of Venus and Earth are tilted with respect to Each other. This event will not repeat itself until the year 2117 making it indeed a once in a lifetime event. The eclipse happens in a pattern of pairs spaced 8 years apart, and followed by a gap of alternating 121 1/2 years and 105 1/2 years respectively. The last Venus transit was in 2004, so if you missed that this is literally the last chance.

The event will be seen from the Philippines from sunrise till noon. It is not safe to view, so proper protection is  needed. Transit of Venus.org has a list of recommended viewing methods.

If however, you lack the equipment or are unsure of your safety to view the event, you may join the public events hosted by astronomical societies in the country:

Posted by AstroNorm at 2:43 AM No comments:

I missed the partial annular solar eclipse yesterday since my tripod was damaged and I had no accessible sight. Anyways, I'm glad to see the different astronomy groups and astronomy enthusiasts having their observations all around and being covered by the media.

Posted by AstroNorm at 10:43 PM No comments:

A Fight for the Night - The Battle Against Light Pollution


When describing it, I always use this example:
"Imagine a candle in a well lit room during the day, no one hardly notices the candle light. Now imagine the same candle when all lights are gone during the night. The candle shines brightly and illuminates the room.
The same goes with starlight, bright lights will make it unnoticeable, but in the dark they are a wonderful sight."

I've been bouncing back ideas recently with my friend Vanessa for her study on Dark Sky Preservation. I've known light pollution to be a problem for us astronomers but I never really realized the depth of the problem. It is not only a problem that affects astronomers, but a problem on human health, a problem against wildlife, against the environment, and against energy conservation. Despite legitimate concerns and efforts geared to addressing the problem, profiteering usually gets in the way.

The sky is for all of us. It isn't just our problem but it is yours as well.

Posted by AstroNorm at 12:30 AM No comments:

How Big is the Super Moon?

When looking at the super moon high up in the sky, most people don't really appreciate the increase in size. The reason, most probably, is that they have no way of actually comparing the size or relative scale. Most people expect a really dramatic increase in size.

I decided to stitch two lunar photos of mine which has been acquired using the same imaging setup [Skywatcher Explorer 150PL with Nikon D3100 at prime focus]. Here you can see the actual difference in size of the moon at perigee position and during normal days. 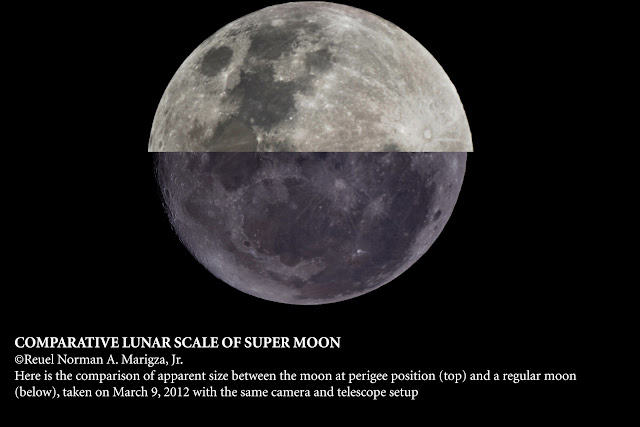 Here is a comparison done by Raven Yu of last month's Paschal Full Moon and the Super Moon.

Hopefully during the apogee position (November) we can make a more distinct comparison. :)
Posted by AstroNorm at 4:40 PM No comments:

My super moon image, as well with that of a fellow pastor's kid from the Philippines, got featured in news-press.com

Update
Both images from the Philippines have been used by Michael Braun in his online news article for the Marco Island Sun Times:
Supermoon 2012: Close approach to Earth makes moon look larger than ever
Posted by AstroNorm at 8:03 AM No comments:

May 5-6, 2012 will not just be a full moon, but a Super Moon.
As the moon revolves around the Earth it an elliptical path it sometimes moves further away and sometimes moves closer. When it is at its furthest from us it is known to be at Apogee. When it is closest (about 50,000 km) then it is in Perigee. That closest approach makes it known as a super moon since it will appear much bigger and much brighter. 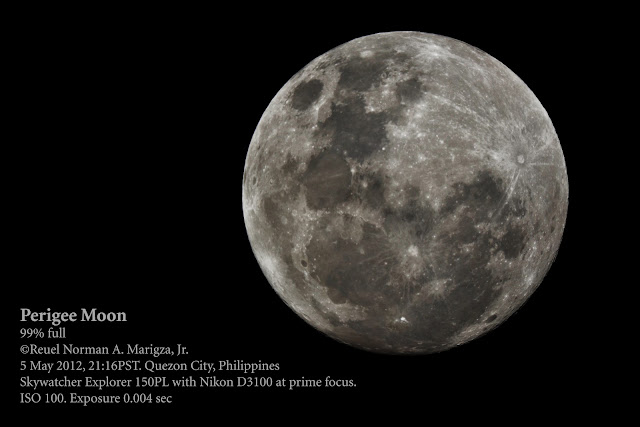 Read more from NASA.
Posted by AstroNorm at 6:50 PM No comments: