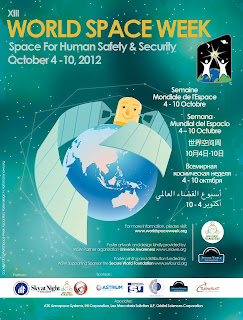 October 4-10 is the World Space Week. This year's theme is "Space for Human Safety and Security."

The World Space Week is an annual global space celebration coordinated by the Spaceweek International Association.
The World Space Week was declared in 1999 by the United Nations General Assembly. The event celebrates the contribution of space science and technology to improve our lives. It also marks the anniversary of two milestones in space exploration: Sputnik I(1st artificial Satellite) and the entry into force of the Treaty Governing the Activities of States in the Exploration and Peaceful Uses of Outer Space, Including the Moon and Other Celestial Bodies.


In line with this event here are some of the events:

The RTU Astronomical Society is organizing Star Burst - a star party. This will be held at the Rizal Technological University quadrangle on October 8, 2012 from 6:00-9:00PM. This event is open to all.

The Philippine Astronomical Society will have a Space Navigation Lecture on Oct. 4 at Mahatma Gandhi International School, Manila; and on Oct. 5 a public telescope viewing and lecture at UST Grandstand from 6-9PM.

Likewise, the UPLB Astrosoc will also be holding activities from October 8-10 at the UPLB Campus.

And on the last day, there will be a Grand Star Party at the UP Sunken Garden (Oct. 10) from 8pm onwards. [Pre-registration required].
Posted by AstroNorm at 2:24 AM No comments:

Last night, after finishing my class, I joined in with the RTU students who were having their observation of the moon. They had setup 3 telescopes (10" dobsonian, 8" dobsonian and 8" newtonian). I took a shot of the moon using the afocal method, wherein you align the camera lens to the telescope eyepiece.

Posted by AstroNorm at 4:19 AM No comments: