Since I’m stuck with binoculars these days I decided to write about one of the beautiful binocular objects – the Messier objects. In the 1700s, the French astronomer Charles Messier sought out to search for comets. In his search he encountered fuzzy-looking objects which he considered a nuisance. To avoid confusing them for comets, he made a catalog of these objects. He charted 103 Messier objects in his catalog which was published in 1781. What Messier considered a nuisance became more known than his comet discoveries. This catalog of deep-sky objects are some of the sky’s best star clusters (both open and globular), nebulae, and external galaxies.


Binoculars have their own advantage when viewing the messier objects. As an example, when we viewed the Orion Nebula through the C8 it all we could see is the Trapezium – a multiple system of newborn stars forming a trapezoid at the heart of M42. The larger nebulosity of the M42 is not visible through the C8. Binoculars are also adequate to show many individual stars in some of the open clusters. In other cases it would appear as a sort of blur of light. Higher magnifications can resolve the fainter stars. Globular clusters usually appear as a patch of light.

Here are some of the messier objects that I’ve imaged via the MicroObservatory Robotic Telescope Network, a network of automated telescopes that can be controlled online:


*NOTE: The human eye is not sensitive enough to see the colors of the nebulae and galaxies even through a big telescope. The colors are brought out using filters during long-exposure photographs.

Posted by AstroNorm at 12:47 AM No comments:

I took advantage of the clear skies tonight after days of cloudy skies. I set out to view as many objects as I can with my Celestron UpClose binoculars. All I had to struggle with was the light pollution from my observing site in Cubao and the fact that I had colds. Nevertheless, clear skies don't come as often.

I trained my binoculars for the constellation Scorpius. My first thought was I need to see the M7 (Ptolemy's cluster/NGC 6475) which remained elusive in my past observation attempts in Cubao. However, I found myself observing the Scorpius Jewel Box (NGC 6231) first. It remained beautiful despite being washed out by light pollution. Then I also caught a glimpse of NGC 6242 which appeared faint. Finally I turned to the position of M7. Luckily I was able to find it with little difficulty. They appeared beautifully as faint fuzzy stars. Next, I moved up and also observed the Butterfly nebula (M6/NGC 6405). I then moved to Sagittarius and found the Lagoon Nebula (M8/NGC 6523) appearing as a fuzzy patch. Moving to the west I came across the bright Arcturus (Alpha Bootis). I turned north to the summer triangle and focused on Cygnus. NGC 6871 appeared very faint, likewise with M29.

I haven't taken binocular astronomy seriously before, and I realized what a waste it was since I had good observing sites in Negros. However, I would still love to have my telescope around. I hope the skies continue to clear up from now on. 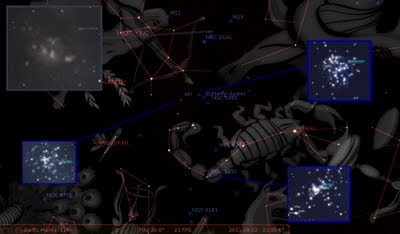 Posted by AstroNorm at 12:09 AM No comments:

As part of our Observation 1 in RTU's Diploma in Astronomy, we were required to purchase binoculars suited for celestial viewing. Our group decided to go for the Celestron UpClose 10x50 Binoculars which were available in Cutting Edge stores. If you plan to purchase one, I suggest you test them first - due to the lack of stock, my first purchase had the optics misaligned, however, the personel of Cutting edge were very helpful in replacing my unit.

I tested my binoculars this evening (Aug 8, 2011) due to the visibility of the 9 day old moon. The view of the moon was remarkable compared to my old binoculars that, unfortunately, has been damaged for unknown reasons. The UpClose provides a fine details on the lunar surface and remarkable detail on the terminator.

Unfortunately, I am unsuccessful in locating the Messier and NGC objects due to poor urban sky conditions and fast moving clouds. I am observing in Cubao, Quezon City with buildings and street light obstructing my view. If classified according to Dr. Torres' Urban Astronomy Scale it would be a type V. The limiting magnitude gave me a hard time finding my way in the night sky compared to the clear dark skies of Negros Oriental where I used to observe during my undergrad.

I was first able to make out Lyra and Cygnus, then using star hopping which I've learned before I was able to locate the other constellations like Aquila, Scorpius, and Sagittarius. I particularly tried to focus on seeing M7 (Ptolemy's cluster) but had a hard time making it out.

Nevertheless, it was a good first try with my new binoculars. I expect it too keep me busy for the mean time while waiting for my telescope to be brought back to Manila from Dumaguete.

Why We Have A Moon

Last Saturday, in one of our classes, our professor was narrating an experience he had when he was teaching in New Era. He asked in his class, "why do we have a moon?" and a student angrily replied "because God put it there, is there any other reason?!" As a religious individual and a man of science, I have to say the reply was over-board and close minded. However,I'm not going to discuss how a lack of understanding of science and faith can cause a gap between the two. On the other hand, it crossed my mind the following night on how our professor could have dealt with it without clashing ideas with a close minded individual.

In my mind our professor could have answered, "yes I agree, however God makes everything happen for a reason, so, what do you think is the reason why we have a moon?" This way, you can hurl back the question to get on with the topic and at the same time avoid the argument (certainly the student can't refute that God has a purpose for everything).

So why do we have a moon?

In a scientific point of view, life as we know it might not have existed without the moon. We probably wouldn't recognize the Earth if it existed without a moon. The first important contribution of the moon to Earth happened during the formation of the moon. When the Earth was forming a planetesimal (proto-planet) the size of Mars, known as Thea, collided with Earth. during the collision, part of Thea's iron core merged with the Earth making it more massive than it was. The impact debris later coallesed to form the moon. This theory of moon formation became known as the giant impactor theory or the 'big splat'. Because the Earth gained more mass, it is much suitable to maintain internal heat which contributed to the formation of Earth's magnetic field - our sheild against harmful UV radiation of the sun. Without our magnetic field, Earth's atmosphere might have been stripped away by the Sun a long time ago.

Professor of Astronomy and Physics, Neil Commins, in his book "What if the Moon Didn't Exist?" narrated the hellish world the Earth was before the collision:

Throughout the millions of years before the planetesimal struck, storms swirled ceaselessly on the moonless earth. Lightning lit the barren landscape, while the air reverberated with deafening thunder claps. volcanoes emitted rivers of lava and clouds of gas and dust. earthquakes shook the earth's surface as the magma (molten rock) in its interior clawed at the bottom of the planet's thin crust. At that time the earth was bone-dry. Any water on its surface was immediately vaporized by the heat stored in the rocks, making the planet utterly inhospitable and lifeless.

Another benefit we experience out of the moon's presence has to do with gravity. The gravitational force between the moon and the Earth is most evident in the tides. These tides also slow down the Earth's rotation. The slower rotation rate has been essential in shaping the life cycles of all plants and animals. The tides also dictate the reproductive process of many marine life. Should the Earth rotate faster,storms on the planet would be more powerful and more frequent. Because of the strong winds, existing plantlife woul need to stay low on the ground and securely cling to the rocks. Leaves would need greater structural connections. Phototropism would also be in jeopardy if the Earth spinned too fast. Majority of plant life turn their leaves toward the sun in order to maximixe the gathering of energy - this would be difficult in a rapidly spinning Earth.

Our stable axis of rotation is also a result of the tidal forces between the Earth and the moon. Without it, we wouldn't have the stable seasons and the planet will experience sudden massive climate shifts as a result of the shifting of our axis. This means deserts will suddenly be frozen lands and vice versa. These rapid changes in climate will seriously hinder the evolution of life.

There are many more contributions the moon plays to the existence of life on Earth (discussing all would make this article too long). The above mentioned are only a few. Putting them all into consideration, you could answer the earlier question with "God gave us a moon so that we can have life."
Posted by AstroNorm at 1:01 AM No comments: