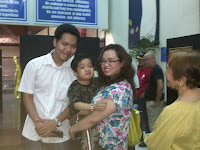 Meet Aedan Pio, an intelligent 4-year old boy with a passion for space. He dreams of being an astronaut, and is a promising astro artist who does watercolor paintings of the planets. Sadly, Pio has a condition called chordoma (a rare kind of brain cancer).

To assist Pio, the Lung Center of the Philippines in coordination with Oxygen Art + Design Gallery will be hosting a fund raising art exhibit entitled Dots in Space. The exhibit will run from Sept 4 - Oct 6, 2015 at the lobby of the Lung Center (Quezon Avenue, Quezon City). Pio has several watercolor paintings of the solar system being sold as well as some paintings by his grandmother. I also contributed four paintings in the exhibit. Other astro artists and imagers are encouraged to add to the ongoing exhibit to help Pio.

As I looked at Pio's paintings I was amazed how he has certain details about the planets such as their colors and features. One particular painting I saw has all the terrestrial planets on one side and the gas giants on the other with Pluto located away from the line-up in accordance with its current dwarf planet status. During the short chat I had with Pio he asked me why Jupiter is so big. I was also surprised to Pio's response when his mom told him to ask me what is Jupiter made off. He responded by saying that Jupiter is made of mostly Hydrogen and Helium.


For those interested to contribute you may contact me here, or reach the exhibit curator Dara Solevilla at 09153023274.
Posted by AstroNorm at 10:09 AM No comments: