Storms from the Sun 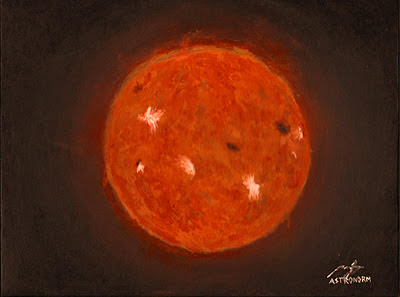 The Sun - the source of light, the source of life.
I've recently began to take interest in solar astronomy since it is the easiest object to observe during these period of cloudy nights and rain. The sun is the closest star. It is a source of energy and it defines the seasons of the Earth. This 4.5 billion year old star is not just a static ball of hydrogen gas, but is a very lively and sometimes destructive object.
The sun goes under an 11 year solar cycle discovered in 1843 by the German astronomer Heinrich Schwabe. He noticed the the number of visible sunspots (cooler regions in the sun's surface) varied; lesser and almost absent during the solar minimum, and more visible during solar maximum. Whenever a solar maximum approaches the sun becomes more active and CMEs (Coronal Mass Ejections) become more frequent.
Recently, a large sunspot AR 1302 was observed. It caused several CMEs and X-class solar flares which caused geomagnetic storms in Earth. A Coronal Mass Ejection is the explosion of an enormous ball of electrified gas from the corona (outer solar atmosphere) which sends large amounts of plasma flying out into space at tremendously high speeds (up to 5 million mph). They are caused by the snapping of magnetic loops that were continuously stretched and twisted.
The electric currents that a CME generates produce geomagnetic storms on Earth, visible as auroras. Normally, when energetic particles from the Sun interact with particles from the atmosphere they get excited and form these beautiful lights at the pole regions. However, when huge amounts of energy, as that released in a CME, reacts with the Earth's magnetic field, they get to interact with more particles in the atmosphere and thus these auroras move to lower latitudes.
CMEs can alter the magnetic field in space and on the Earth. It can heat up and expand the atmosphere. It can also set off electrical surges in power lines and oil pipelines and can cause major blackouts, communications problems, and satellite damage.
Here are some useful links related to this post:
Aurora Images. "Severe" Sun Storm Brightens Skies.
Daily Sun Images and Movies. SOHO (Solar and Heliospheric Observatory)
Solar Images from the Philippines. TV-101 blog page.
Posted by AstroNorm at 6:21 AM