The year 2019 brings us 5 eclipses which is something people are excited about. However, not all of these are visible in the Philippines. Geographical differences affect our view in the sense that at the moment an eclipse takes place in one side of the globe, the other side of the globe does not see it. Of the 5 eclipses, only two are visible from the Philippines (with one needing a geographical advantage in the South).

Eclipses happen when an object of roughly the same apparent size covers the other object. In the case of a solar eclipse the configuration is Sun-Moon-Earth, and for lunar it is Sun-Earth-Moon.

The July 17 Lunar eclipse is partly visible from our reference. From our geographical location on the globe (that's right flat-earther's) the Earth will be rotating us away from the eclipse during the 'Blood Moon' phase. Meaning the Philippines will move or rather rotate to the Sun facing side of the Earth as the rest of the eclipse takes place in view from other geographical locations. From our view it can be seen as an eclipse during Moonset. 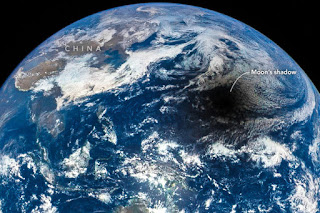 In the case of a solar eclipse it is the Moon casting a shadow on the Earth. Now since the Moon is smaller it casts a smaller shadow making the eclipsed area smaller. As a result the geographic location experiencing a solar eclipse is very limited. As you can see in the picture on the right (Image by NASA DSCOVR EPiC Team) the shadow of the Moon only covers a certain region. Since the shadow is relatively small a solar eclipse will only last for a short time.

In the case of the December 2019 Annular Solar Eclipse the image below (Fred Espenak|NASA GSFC) shows the eclipse path and regions of the globe they are visible in. The red band is where the center of the Moon's shadow passes where the eclipse will be seen as an "annulus" or ring. Note that when an annular eclipse happens it means that the Moon is further from the Earth on its orbit, which in turn results to an even smaller shadow. For observers in the Philippines the amount in which the Sun is eclipsed will vary depending on how close you are to the shadow. Observers in Luzon will see less of an eclipse as compared to observers in Mindanao.

Before making the Balut island simulation I ran it for Gen San. Even from Gen San it doesn't appear as an annulus.


Note: I accidentally edited the original post while updating the 2019 NAW calendar. I have tried to redo the general content as how I remember it.
Posted by AstroNorm at 7:20 PM